I have a 30 gallon aquarium that was originally set up about 7 years ago, in my previous house. It hasn’t been rebuilt since then, it was even moved partially full of water (a fun thing to attempt to do, I wouldn’t recommend it). As there are not currently any fish in it, I decided to take advantage of it’s emptiness and do a complete rebuild. I removed the under-gravel filter which was not effective anyway, drained all the water, removed the old gravel (which was a blue-green/black mix that I was no longer fond of), and scrubbed the tank down, and put new cardboard along the back (the black background makes the tank look much nicer when it is lighted).

With the tank all cleaned up and ready, I filled it with about 45 pounds of river pebble gravel, for a more natural look. Wanting to continue the rock/stone theme, I pondered buying some fancy aquarium rock, but instead decided to use some of the excess Pennsylvania fieldstone I have in my backyard, purchased when I was built the pond in my backyard (I bought 9000 pounds of stone in total, most of the excess has been put to use as walls for raised flower beds). To try to minimize the impact the stone would have on the eco system of the aquarium, I washed the stone, and then boiled it for 30 minutes. This is a rather time consuming process, since my largest pot is only 10 quarts, and it takes about 20 minutes just to get the water and stone up to boiling. It took three pots to boil all the stone, which totaled about 50 pounds.

I wanted to build up a mound of rock in one corner of the aquarium, and I wanted to make caves throughout the mound so the fish that will soon be occupying the tank would have someplace to play. Most of the caves were just dead ends, but there is one cave that the fish can swim straight through, made by having a big rock suspended by 4 stacks of small rocks. Here are the stacks of rocks before the big rock capped them, creating a nice little pathway for fishies to swim through: 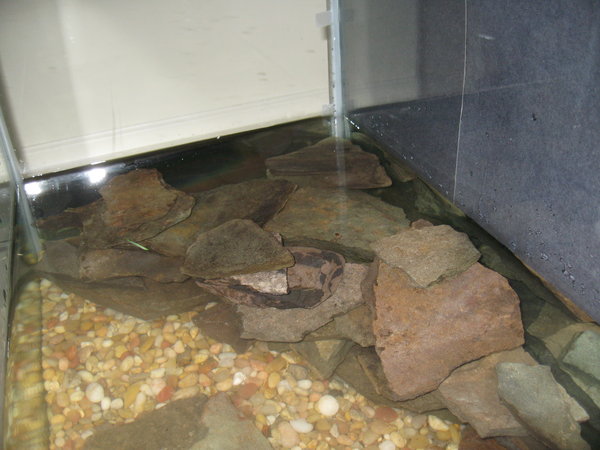 I attempted to keep the rocks mostly level, both for ease-of-stacking and since I think it looks more natural that way. Fieldstone naturally forms as sheets, and ideally you would arrange the rock so that the colors and sizes would match, but sice this was just leftover bits I couldn’t be too picky about which pieces I used. I think the pile came out ok: 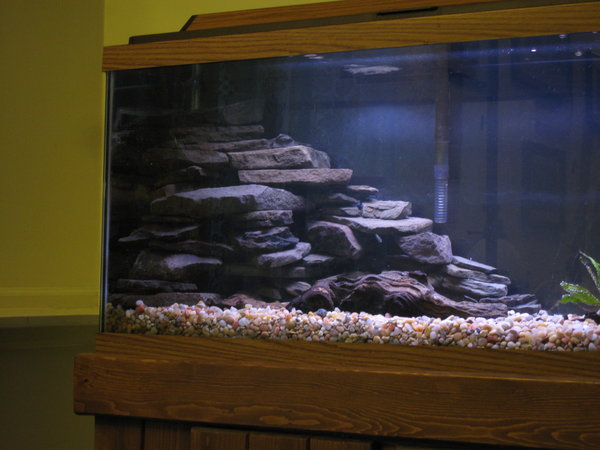 The final touch was to get some more plants to decorate the rock. I pulled some excess java ferns from another of my tanks, and shoved their roots under the stones in various places. Java fern doesn’t like gravel, but it loves latching onto driftwood and stones, so they should do well in this setup. 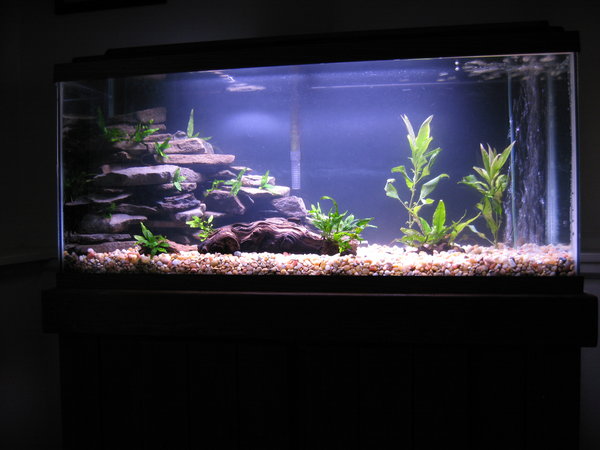 As you can see, the lighting of the stone stack isn’t the best, this is because the strip light is only using a 24″ bulb, even though the tank is 36″ long. This will need to be upgraded for the plants to be happy. I am also considering adding more stone, possibly as a small stack in the right corner to help balance out the tank. It will reduce the water volume even more unfortunately, but I don’t plan on keeping a large number of fish in the tank, so that shouldn’t be a huge problem.